A Space your Generations can Call Home

Prelaunch Prices only for Limited Units 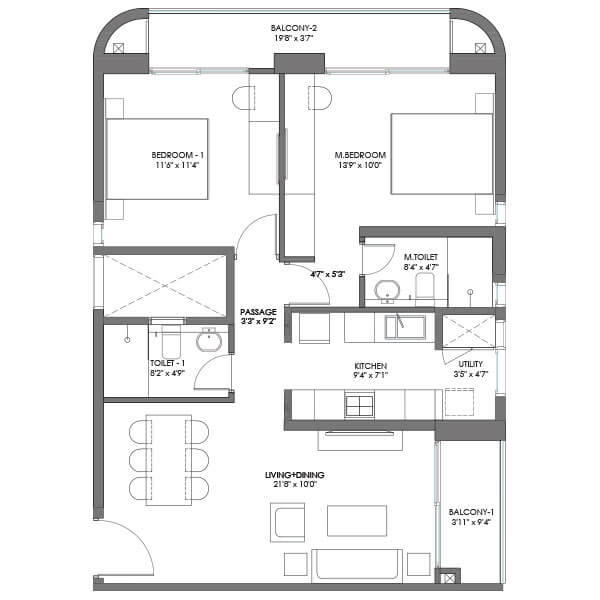 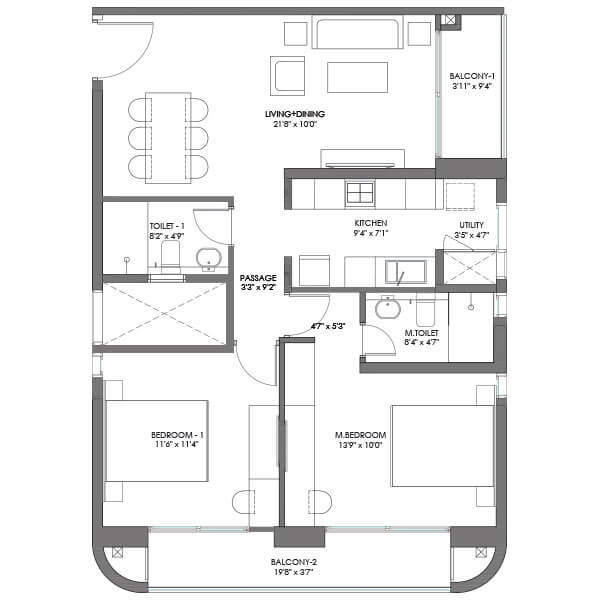 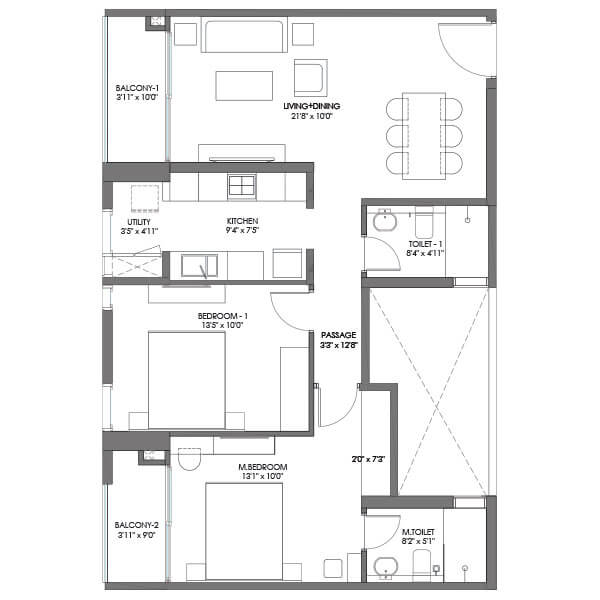 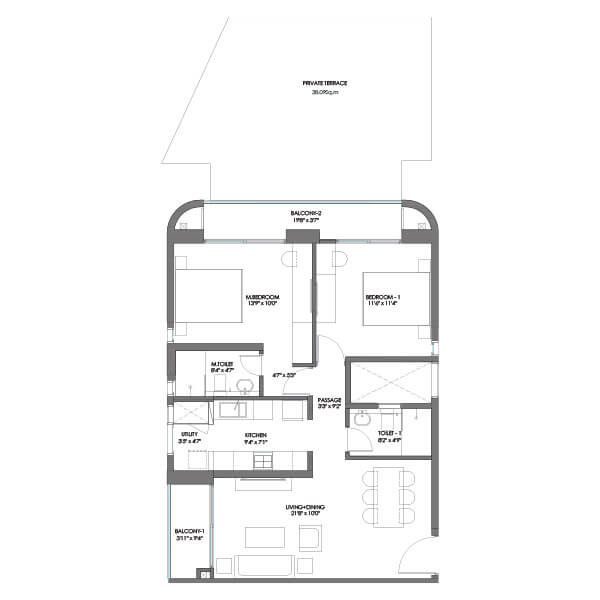 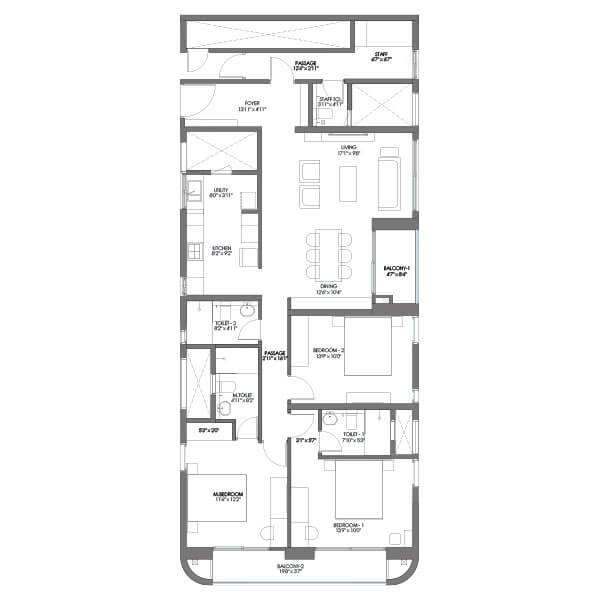 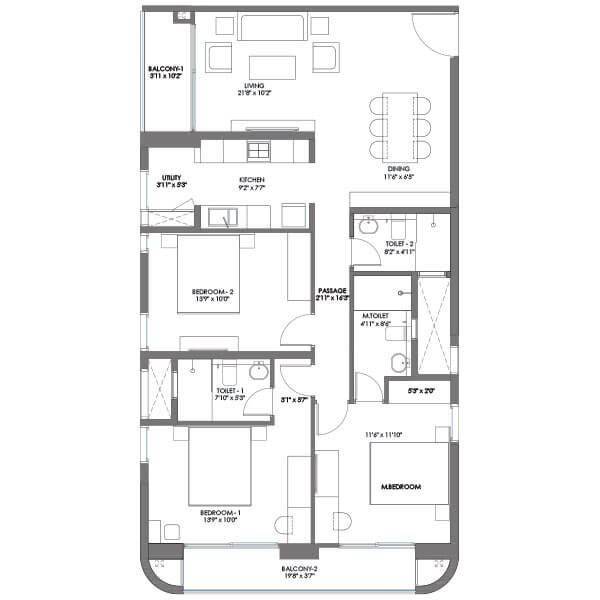 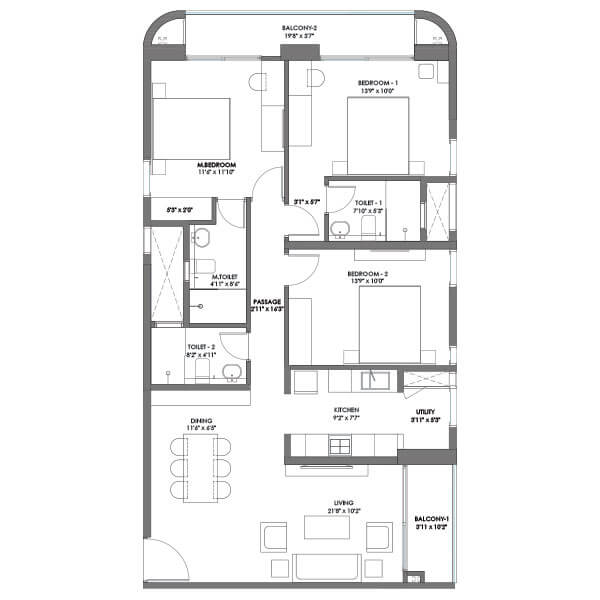 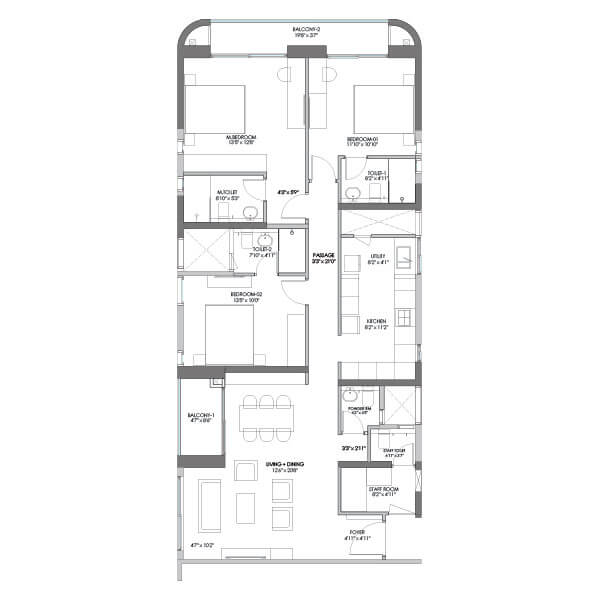 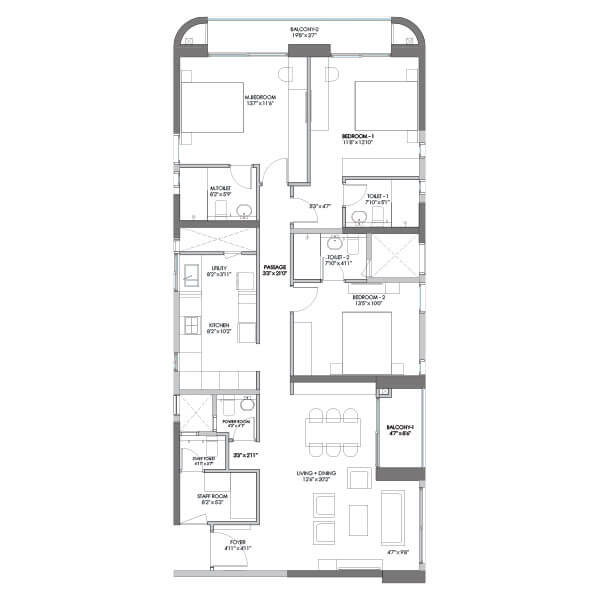 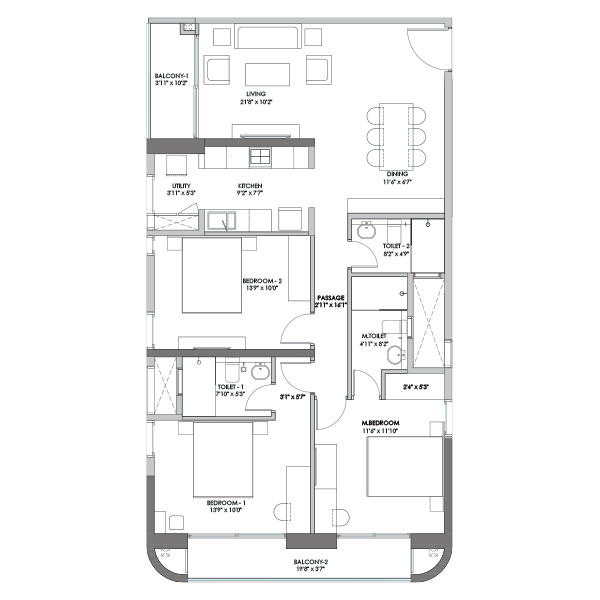 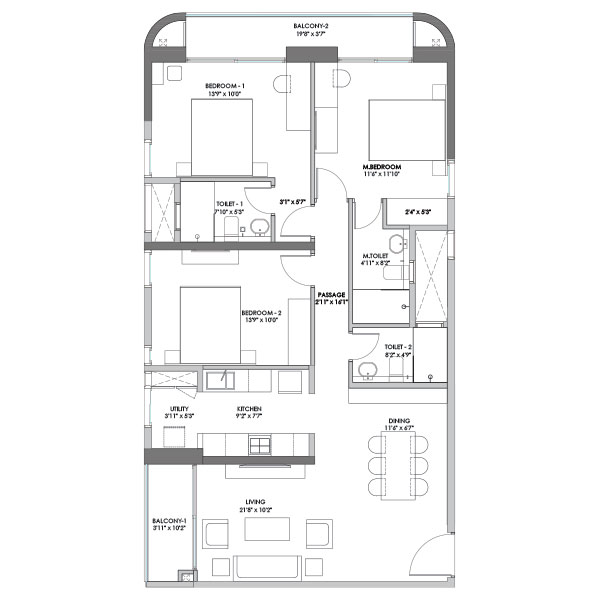 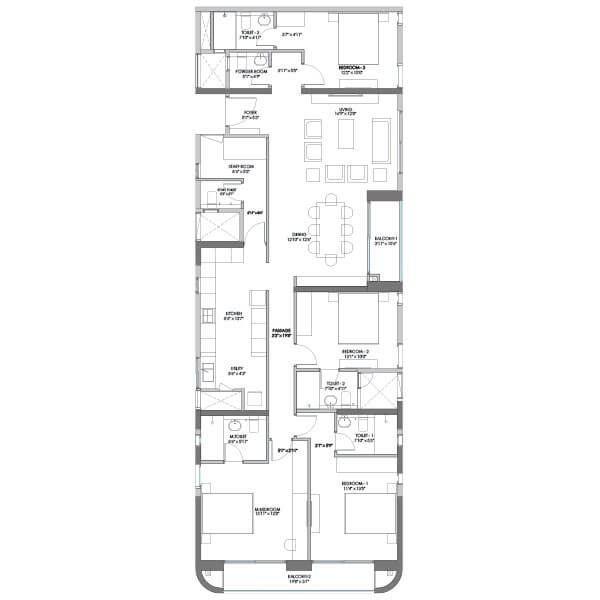 Birla Estates Private Limited, is a 100% wholly owned subsidiary of Century Textiles & Industries Limited. It is a company of the B. K. Birla Group of Companies with presence in cement, textiles, rayon yarn, pulp & paper, salt, chemicals & more. Birla Estates is also in developing land parcels held by the group & also looks at the joint development/strategic tie-ups across top cities. Birla Estates aims to transform the perception of the Indian Real Estate sector by delivering an exceptional experience & creating value, at every level, for every stakeholder.

Why is this new Birla project in Bangalore an ideal investment?

There are very few cities that have shown remarkable growth as Bangalore post the IT revamp. Once famous as the Garden city, it is now the real estate hotspot. Rajajinagar lies on the periphery of central Bangalore which is why the demand for properties in the region has shot up.

Those settling in this thriving locality of the largest tech city of India, enjoy umpteen advantages. Owing to which Birla is coming up with their latest development project, Birla Tisya, in this promising locality. The development is becoming the talk of the town and there are numerous reasons for that.

The foremost is the ease of using different modes of communication. Rajajinagar being at the heart of the city provides close connectivity to important tech spaces like WTC Malleshwaram, the tallest commercial development in Malleshwaram and Global Village Tech Park. Birla Tisya Rajajinagar is only 6 km away from these prominent localities. There are various options for all varieties of social infrastructure which of course prevents time wastage in urgent situations or simply while running errands.

Being a Birla project, Birla Tisya Bangalore has all the features that one imagines to find only in a dream home. It caters to all the needs one can possibly think of and much more. The creators of Tisya have put the health and wellness of the residents in priority and the facilities for the same are endless.

The outdoor activities for which provisions have been made in Tisya are not only beneficial for the body but also have a spiritual hint to them. There is a tennis court, yoga deck, a cricket net, a squash court, a jogging track, and a fitness corner for those who wish to indulge in physical fitness. But there is also a herb garden, a separate fragrance garden, a meditation centre, picnic pocket, forest cabana, Pet Park and a sculpture garden for those who want to relax and bask in leisure within the picturesque compounds.

For those who want to pass time indoors, relaxing spaces are available within the towers. The tower amenities include a card room, a lounge, yoga, a sauna bath, a chess/carrom/ pool table and a video games room. The common clubhouse has a wide range of different sets of amenities, primarily for social gatherings. For informal gatherings, there are, again, various options: pre-function hall, home theatre, multipurpose hall (partly a badminton court too), terrace seating with barbeque to suit your requirements.

The pandemic has been functional in making ‘work from home’ and similarly ‘taking classes from home’ a ‘new normal’. Keeping in mind this 360-degree societal transformation Tisya has dedicated spaces for formal affairs: the co-working space, meeting room and a classroom.

Beyond the external benefits of living in Birla Tisya, a huge part of the experience lies in living the regal life within the plush apartment homes. These snug, Vastu-compliant, adequately ventilated and spacious rooms are designed to make you feel your dream home come to life. Birla Tisya floor plan and rooms abide by the ‘Birla homes’ standards which are acknowledged for their thoughtful architecture.

This is the perfect time to invest in Birla Tisya, given that there are only a few units up for pre-launch booking at only INR. 1 Lakh, which is a steal deal as the prices are likely only to surge in future making it a valuable investment.

Why Rajajinagar is the perfect locality for your forever home?

Bangalore as a city has seen remarkable growth in recent decades owing to the tech boom in the area. Bangalore, which was once a quiet city suitable to have a retirement home, has now become one of the four metropolitan cities in the area.

The new Bangalore is certainly larger and livelier but the prominent areas are still close to the middle of the city. Therefore, the Birla group is coming up with their latest project in the city, Birla Tisya in Rajajinagar. Rajajinagar is one such locality that has gained popularity post-development. It’s the area right in the middle of the city and connects the most prominent areas of Bangalore.

When Bangalore transitioned from being the Garden city to being the Silicon Valley of India, the boundaries got stretched towards the outskirts. But the areas in and around central Bangalore become major commercial hubs. The real estate developers have gauged this swing of interest in home buyers and Rajajinagar, especially, is the epicentre of the real estate boom. It’s where the new upcoming projects in Bangalore are being erected for the utmost comfort of the residents.

It almost goes without saying that Rajajinagar enjoys various locational benefits. The connectivity through the roads and the metro is striking and something that is difficult to find in Bangalore. Cabs and rickshaws are also easily available in every major square of the area. It is appx. two hours away from the airport (BIAS airport bus facility is available every thirty minutes to the airport and back) The railway station is also one hour away from the main railway station of Bangalore, from which again.

The locality also has plenty of social infrastructure. Those residing in Rajajinagar, have easy access to top schools and educational institutes, some acknowledged across the country. Famous hospitals like Fortis are also in the area and it is easy to find a clinic for sudden medical emergencies, any time of the day. Overall, citizens in this part of Bangalore don’t have to spend their precious time travelling from one end of the city to the other for basic requirements.

The crowd in Rajajinagar mostly comprises young individuals. Owing to the career and work opportunities that are in huge abundance in Bangalore, the ethos of the city is mostly created by the students and working professionals in the high majority. This tendency is evident across Bangalore. In terms of real estate, 2 BHK flats in Bangalore are high in demand, Rajajinagar is no exception to it.

Bangalore real estate trends are in favour of Rajajinagar. Finding a preexisting home is not tough because of the popularity of the place and at an affordable price with respect to Bangalore property prices. There are many developments yet to be completed. These homes are great not only from the perspective of investment but also as a forever home. The pre-launch prices of these homes are less expensive than the established ones, and they come with up-to-date facilities. Since it is a residential hub and a business hub, one can also lay their hands on a luxury property in Bangalore.

Given the pleasant weather of the beautiful city and the endless work opportunities, Bangalore is a city that justifies your investment in your forever home. This is why Birla is bringing its new luxury project in Rajajinagar which is packed with high-end amenities. Birla Tisya is the most sought after of all Birla new launch projects in Bangalore. With a 70,000 sq. ft. clubhouse, a separate co-working space and twin balconied apartments, it is the best place to put your hard-earned money in. Living in Rajajinagar only makes sense if you are living the best life and this is the opportunity to do it.